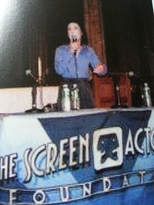 A Seminar In Cold Reading

"a gift from the audition gods"
member email to SAG Foundation
Many actors and even their coaches don't really believe that you can learn a technique for cold reading audition sides.  They and many actor groups simply sit and read scenes and scripts, one after another, thinking that will help.  Instead, it just makes the actors ingrain the same mistakes.

Michael Chekhov - "The Actor's Body and Psychology" from To The Actor
Finding Mental Center - where the twin perspectives of actor and character reside
Connecting to Physical Center - release point of voice, emotion and movement
Working with, not against, gravity

- Getting specific with the Creative Circumstances

Immersion the the state of "I am"  NOT my character is.....
Definition of a moment-to-moment, as physical, not words
Imagining an exact "Moment Before": not a scenario, a word, a look, a movement
The 4 Who's:  Who I am, to Whom I am speaking, Who is around me in the scene,
and Who not present I reference
Establishing time and place
Selecting and testing for an objective that will drive and hang the scene together

Accept that rhythm not words are the "actor's lifeline."
Elements
Thought groups vs. word-to-word readings
Ebb and Flow
Trust, don't rush the pauses:  think through them
Freeing emotion and movement by releasing energy
The way into character-  energy shapes
Each concept understood, each practiced will eventually synthesize into one spontaneous, physical, vocal and emotional response to any text.  Cold readings can then approach performance level.
*  The title of the program "DROP-DEAD" COLD READINGS was inspired by a major bi-coastal talent manager who told me all the casting directors only wanted submitted, in their words, "Drop-Dead" cold readers.